'The cost of stopping the Russian bear now is high—but it will only get higher if the West does nothing’
states The Economist in an article on April 19th, 2014. Eight years on modern diplomacy is experiencing fundamental changes at an unprecedented rate, which affect the very character of diplomacy as we know it.

We continue our exclusive HHL Alumni 'Outlook' keynote series to hear from thought leaders what conditions they see necessary for a prosperous world.

Hence, it is with great pleasure to invite you to another distinguished HHL Alumni keynote by his excellency Dr. Hans-Jürgen Heimsoeth, German Ambassador to Ukraine (2008-2012) and the Federal Foreign Office’s special representative for the Eastern Partnership since 2019.

We are looking forward to an insightful keynote and interactive session with all of you.
Sincerely yours, 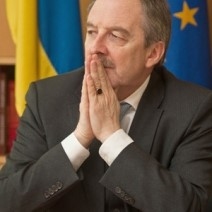 After completing his attaché training in 1983, he began working in the department for the Soviet Union at the Foreign Office in Bonn and then from 1984 to 1987 in the political department of the embassy in the Soviet Union. This was followed by a position as permanent representative of the ambassador in Somalia from 1987 to 1989, before he was personal advisor to Federal President Richard von Weizsäcker between 1989 and 1994. Between 2001 and 2004 he was Head of the Department for Central Eastern Europe, the Baltic States, Norway, Iceland and the Baltic Sea Council in the Political Department of the Federal Foreign Office. From 2008 to 2012, Hans-Jürgen Heimsoeth was ambassador of the Federal Republic of Germany in Ukraine and was then succeeded in this post by Christof Weil, who had previously been ambassador in the Belarusian war. From 2012 to 2015, Hans-Jürgen Heimsoeth was Head of the Permanent Representation of the Federal Republic of Germany to the OECD in Paris. In 2016 he moved to Sweden as ambassador of the Federal Republic of Germany, where he stayed until July 2019. Heimsoeth has been the Federal Foreign Office’s special representative for the Eastern Partnership since 2019.

Photo by Photo by Kostiantyn HRYSHYN, The Day